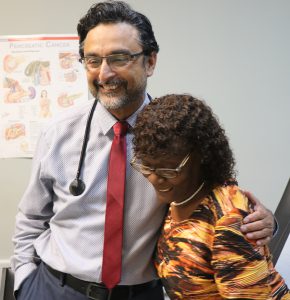 75 year-old Isie Phene Madden of Dumas realized she was having GI problems on a Sunday. “I told my brother I wasn’t going to make it to church that morning,” she said, “and I went in to see my family doctor on Monday.” She had a colonoscopy, followed by surgery to remove some polyps. That was when doctors learned that Isie Phene had stage three colon cancer.

“They put in a port, and they sent me to Dr. Asif Masood where he set me up with chemo,” Isie Phene said of her treatment plan at Jefferson Regional’s Jones-Dunklin Cancer Center. “I had 36 treatments. The first one was hard on me,” she remembers. “Dr. Masood said I have a delicate body. But they got the medicine adjusted and I would take chemo every two weeks.”

Not only did Isie Phene find medical care at the cancer center, she found friends. “Everybody over there was nice to me,” Isie Phene said. “I still go up there for check-ups, and they know me by name. I love them –  I’m always cooking and bringing them something. One day they were talking about food, and I told them I was going to bring them some chicken and dumplings, and a cake and some cornbread. I brought it and they ate it, so now they always say ‘when are you going to bring us some more chicken and dumplings?’ “ Isie Phene laughs at the memory. “I guess when I don’t have to go back anymore I will still go back anyway because I just love them all!”

Isie Phene completed her chemo regimen in March of 2018, and now goes for a checkup every six months. “I believe that after you have surgery and you have something that could come back again, you take the treatment your doctor recommends,” she said. “Don’t wait until you’re hurting again. If you take the doctor’s instructions and do what they say, everything will be okay.”