Like many professional women, Erin Bolton, RN, is accustomed to a certain amount of chaos. As a wife, mother, church leader and Director of Quality Management at Jefferson Regional, Erin has always juggled numerous responsibilities, but when her hospital became the first in Arkansas to identify a COVID patient, all the balls came tumbling down … at least for a minute or two.

On Wednesday, March 11 of 2020, a group of managers and directors were gathering for the 9 a.m. safety huddle when Erin received a call on her cell phone from a Little Rock number. “I was expecting to hear from the state health department because we had sent off a COVID test earlier in the week, so I decided I’d better take the call,” Erin said. “Kat Waters from the Arkansas Department of Health said ‘Erin, I need you to sit down.’ And when she said that I said ‘No, I don’t. I know what you’re about to tell me.’ And she said ‘You have the first COVID patient in the state of Arkansas.’ I grabbed a pen and she said ‘OK, I have a list of things I need you to do and we will call you back in an hour.’”

Even though Erin was momentarily shocked by the news, she was not unprepared. “We had been planning for COVID patients, and immediately set a 10 a.m. meeting to activate our internal command center.” As with all bad news, word traveled fast. “We contacted the health department, and learned that the Governor was going on television live with the news at 10:15 a.m.,” Erin said, “and when we started calling managers and directors, we found they were already hearing the news from their family and friends.”

That first patient was initially referred to as “Patient Zero” in order to protect his privacy. He was admitted to Jefferson Regional on Friday, March 6, was tested the next Monday, and placed in isolation as a precaution. “By the time he was diagnosed on the 11th he had already been in our facility 48 to 72 hours,” Erin said, “and we already had employees calling in sick – people who had cared for him over the weekend. So as we started looking back on the timing and who had been in contact with him, we had to figure out how to get all these employees tested. The department of health was calling, wanting family members tested, and this was all happening as we set up the command center. We ended up almost living there for at least the next eight weeks.”The Jefferson Regional command center consisted of leaders from every area of the hospital, from nursing and medical staff to environmental services, materials management, marketing, and, of course, infection control, which is one of Erin’s direct job responsibilities. It was a relief to have a master plan in place, but it was still untested ground, and the first few days were extremely tense. “We were there pretty late every night because it seemed like every time we tried to go home, the department of health would call with more results, and every time they called with more results, we had to notify family members, patients, and employees. We worked all weekend the first weekend because it seemed like every day something changed. First, you only had to wear a mask if you were taking care of a COVID patient. Then anyone caring for patients had to wear a mask, and then it was everyone who came into the hospital. Of course, we had to get the screening stations up and going, and decide exactly what information we needed to collect from those people, and then decide what were we going to do about visitors. And we were still getting reports every two and three hours from the department of health with new results.” On top of that, Jefferson Regional staff members were also driving some of the tests to Little Rock for processing. “They had a courier, but there were many a night and on the weekends that one of us had to drive the tests to Little Rock.” 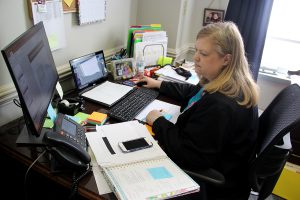 Ultimately, Jefferson Regional designated two wings strictly for COVID-19 patients, as well as most of our ICU beds. At the height of the pandemic, there were 27 COVID-19 patients being cared for at one time.

While Erin spent most of her day managing the pandemic, she was also worried about the safety and security of her family. She is married to Bryan Bolton, Minister of Music and Children at First Baptist Church in Pine Bluff, and the couple has a daughter in college and a 14-year-old son. “On March 11, when I got that first phone call, I had my laptop at safety huddle but I didn’t have the power cord, so I went back to my office to grab the cord. While I was upstairs, I called Brian,” she said, her voice breaking at the memory, “and I said ‘I need you to know this. I don’t know when I’ll see you again.’ I asked Brian to let the kids know, and I called my parents.”

“I’m used to working on big projects,” she continues. “I’ve implemented software upgrades and new software. I’ve worked through flooding in South Arkansas when I worked for Hospice, evacuating patients and making sure we could take care of them. I’m used to high-stress and busy situations, but you could always go home and get away from it. With COVID you couldn’t because it affected the entire family. The first couple of weeks it was fine, it was kind of like an extra spring break. But then the kids couldn’t go anywhere.” The safety restrictions extended to church, where Erin is a youth leader. “We didn’t go to church for a couple of weeks, we canceled all activities. But how do you minister to those people? So we started virtual church, and then parking lot church, those kinds of things. I couldn’t see my parents, or my brothers and sisters. Every part of my life was affected by COVID. Just trying to make sure everything got done, and keeping everyone relatively happy, it was extremely difficult.”

It was so difficult that a few weeks into the crisis, the entire command center team got a serious wake-up call. “On April 1st, I ended up in the emergency department with blood pressure at stroke level,” said Erin. “It made us all realize that we had to do something different when it came to self-care. We had to start rotating, even if we just got out and walked around in the parking lot for a little bit. We kind of adopted a new mindset that we were taking care of everybody, but we had to take care of ourselves, too.”

Eventually, everyone settled into a new normal and adjusted to the unique needs of the situation. “I really couldn’t be more pleased with the hospital’s response,” Erin said. “Everybody jumped in and just did what needed to be done. Even our Chief of Staff, Dr. Amy Cahill, sat with us one night and called people to give them test results. Someone said I was a pro at this and I said no, I was forced to learn to do this. All of us had to step out of our comfort zone.”

One year later, COVID-19 is still a significant threat, but things are slowly improving. Jefferson Regional is averaging a handful of COVID patients a week, and while safety precautions are still heightened at the hospital, the focus is now largely on vaccinations. The hospital has given more than 5,000 shots to community members since vaccines became available. And after many months in the hospital and rehab, Patient Zero has recovered from the virus and recently visited to see some of the Jefferson Regional nurses who cared for him. Looking back, Erin Bolton realizes she has been a key player in a historic event. “I got the first call, was part of the initial response, all the way through and now I’m heading up the vaccination effort. Those 5,000 shots represent people we’ve given a little bit of hope and encouragement to. Maybe they can see their families again. They’ve missed weddings and graduations, and grandbabies being born. Hopefully, now we can be a part of giving them their lives back.”