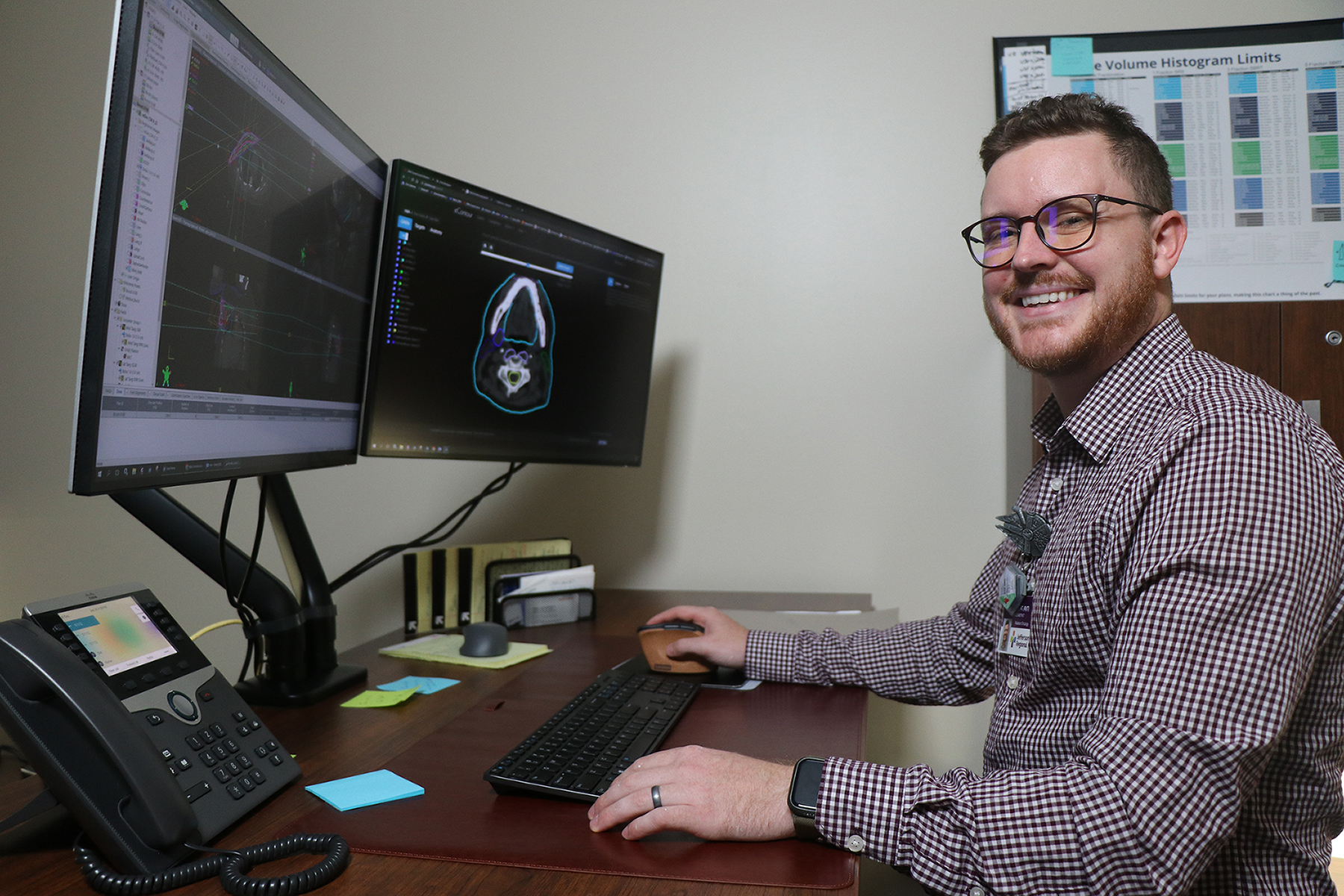 The recent addition of radiation oncology services was the final component of the Jones-Dunklin Cancer Center, which opened in June of 2022, and it provides our patients with top-of-the-line equipment that can’t be found anywhere else in Arkansas.

“We are the only facility with this level of CT in the Southeast region of the United States,” said Ryan Barbry, Lead Dosimetrist at the Cancer Center, “and for the type of treatment we provide here, we also have the highest-level linear accelerator that’s available.”

If you don’t know what a Dosimetrist is, you’re not alone. It’s a specialty devoted strictly to the use of radiation in cancer treatment. “I call myself a pharmacist of radiation,” Barbry explains, “because I get a prescription from the radiation oncologist and then determine how to administer the dose to the patient as safely as possible.” As a result, Barbry is involved in all cases where radiation is determined to be the best treatment option, and he sees the benefits of our newest technology first hand. 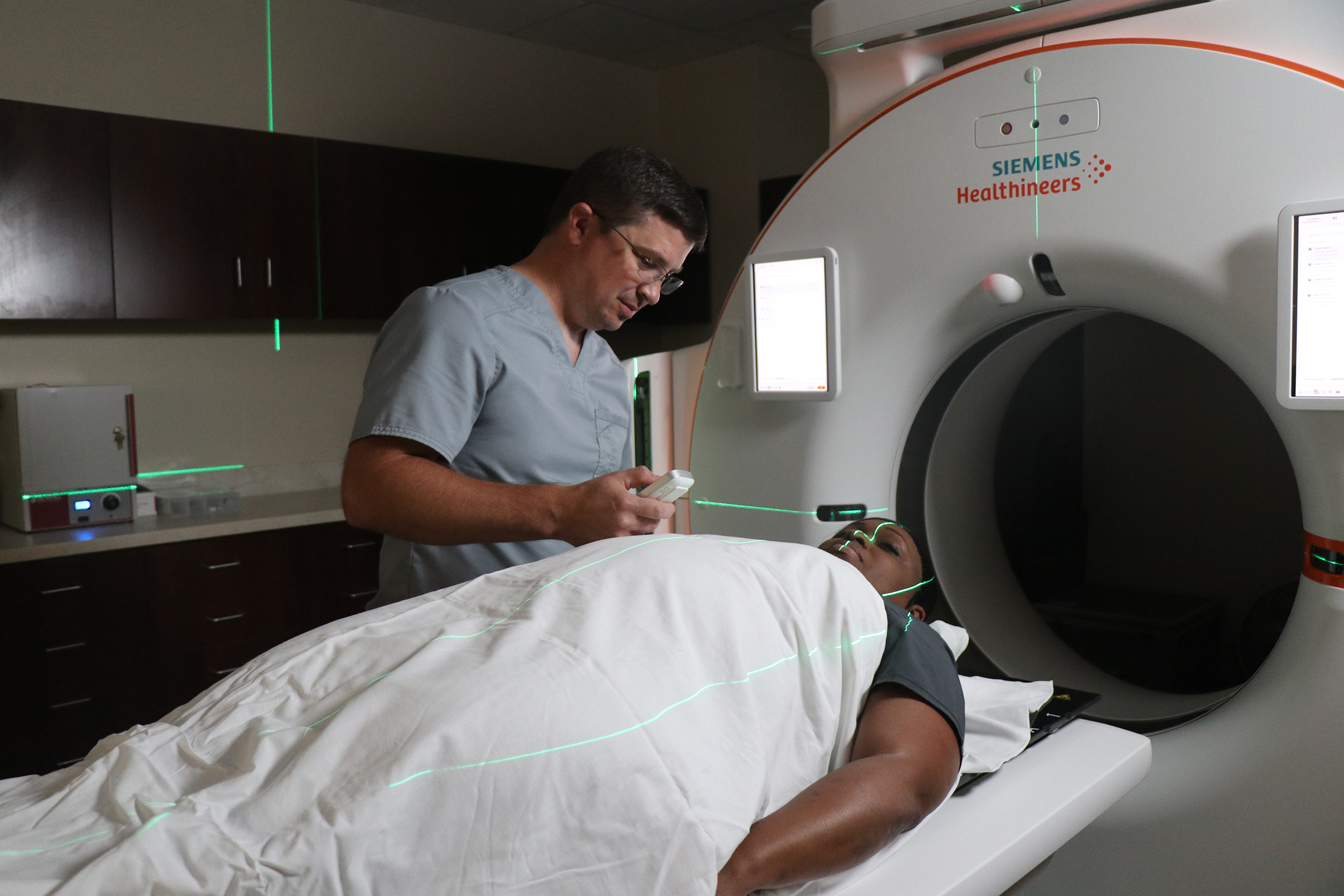 The Open Pro is the very best CT offered in this platform by the company Varian, (recently acquired by Siemens) which provides equipment for about 80% of the radiation oncology market in the United States. In fact, executives at Varian were excited to see a community hospital, such as Jefferson Regional, purchase and use this technology, which traditionally has been limited to research facilities.

“After a cancer diagnosis, we get a referral from a physician and our Radiation Oncologist, Dr. Shahid Hameed, will meet with the patient,” Barbry said. “If they agree on treatment, we will schedule a simulation date. That’s when the patient returns for a CT in our new scanner.” The Open Pro CT is the first of its kind, a radiation oncology-specific scanner. There are two tiers of this CT platform, and Jefferson Regional has the most advanced of the two, making us the only hospital with this level scanner in the Southeastern United States. The Open Pro is faster than earlier versions, and is capable of using Artificial Intelligence – improving image quality and accuracy on the most complex of cases. “During the CT, we simulate what the patient will do every time they come for treatment. We will use certain devices that conform to the body so the patient is comfortable, and so they lie in the same position every time.” Images are then sent to Barbry and he oversees the treatment planning project from beginning to end, outlining the normal structures and identifying areas of the body to spare from the radiation.

Jefferson Regional’s Open Pro CT is faster and produces better quality images than previously available. “This scanner is particularly good at 4D scanning,” Barbry said. “In the past, because we scan for an extended period of time to gauge how a tumor moves during respiration,4D scans have the potential to be blurry. This new technology allows us to connect these slides very smoothly so we have very clear scans and we’re able to get very precise treatments.”

“One principal of radiation,” Barbry said, “is that if we can target a very small area you can take that to a much higher dosage and it still be safe for the patient with improved prognosis. So we do something called stereotactic treatment, where very concentrated radiation is given over a short period of time.” It has proven to be very effective, Barbry said. “In fact, we are still following up with patients from several years ago who have had no recurrence, with no invasive surgery, no chemo. And we can also perform stereotactic treatment on patients who have had previous treatments for cancer, such as chemotherapy.”

Once the plan is laid out, it is sent to the Physics department and quality assurance testing will be conducted. Once Physics gives the green light and Dr. Hameed signs off on it, the patient can begin treatment. 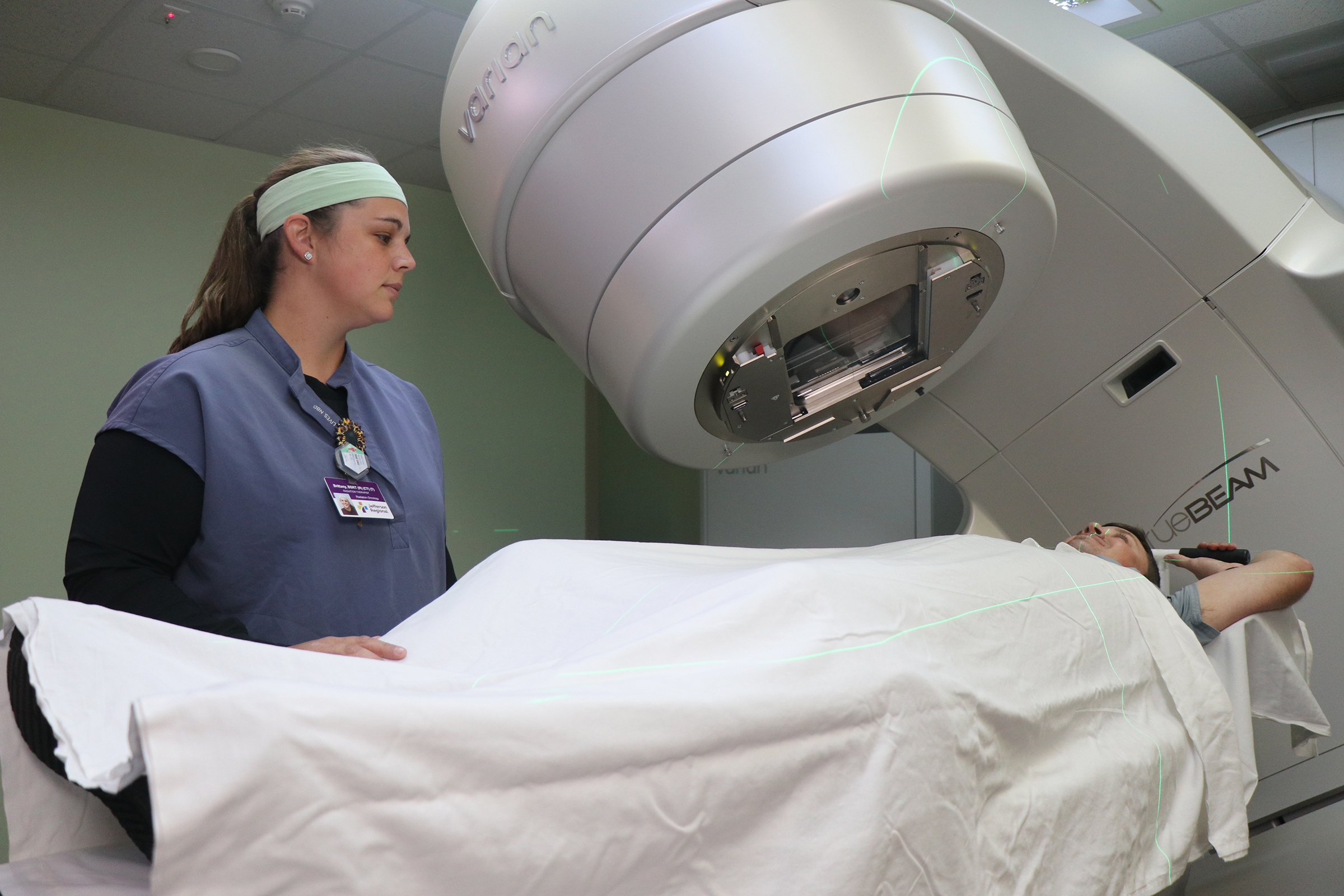 The second component of radiation oncology treatment is actual delivery of the radiation, which is now provided by the new True Beam Linear Accelerator from Varian. Robotic arms rotate around the patient, generating 3D images to confirm the location of the tumor and then delivering the precise amount of radiation required.

“Our new machine is the very best Varian offers in this platform,” Barbry said, adding that the company provides equipment for about 80% of the U.S. radiation oncology market. “Executives at Varian were very excited to see that a community hospital, such as Jefferson Regional, would purchase and use this technology, which traditionally has been limited to research facilities.”

With earlier accelerators, the table could only move in and out, and up and down, in a very 2-D fashion. The new machine features a six-degree couch, which can now rotate the patient six degrees of any direction. “Since we did CT for simulation, the patient is positioned on the treatment table just like simulation day,” Barbry said. “Two arms will open and perform a CT, so we have the original first day CT and the current CT, and the table is keeping track of all the directions the patient will need to move to make those images align perfectly. Once the radiation therapist is ok with the image, Dr. Hameed will sign off on it and the couch will adjust the patient so we can treat them exactly the way we initially planned. The treatments used to take as long as 45 minutes, but with this machine, we can treat at more than twice that speed, so some patients are on the table for as little as 15 – 20 minutes.”

Being part of the Jefferson Regional hospital system is also a significant benefit for radiation oncology patients. “Whether the individual has been seen at a clinic, the hospital or the Emergency Department, their medical records are available to us 24/7 at all Jefferson Regional locations. That means cancer patients can receive the very best care without traveling long distances, and that’s a huge win for people who are very ill.”

Thanks to education about the importance of screenings and the availability of technology, most types of cancer can be caught early and successfully treated. “Obviously, we’re always trying to cure patients with what we’re doing,” Barbry said, “but more than anything what radiation oncology has done is to help extend life and extend the quality of life for people with cancer. We’re very excited about the future of cancer care at Jefferson Regional.”